Image of grape crush for Tiferet “Once the skins are broken, the fruit and equipment can only be touched by the rabbis. L-R: Rabbi Levy Teitlebaum, Ari Cipes and Rabbi Shmuly Hecht.

Image of the “garage” wine cellar “Ari and Ezra Cipes supervised the making of the wine in the Cipes family garage, which happens to be the original Summerhill wine cellar. L-R: Ari Cipes, Rabbi Shmuly Hecht and Ezra Cipes

Image of the bottling of Tiferet “Bottling is an exercise in focus and quality control. L-R: Rabbi Levy Teitlebaum, Rabbi Shmuly Hecht.

A note from winery CEO, Ezra Cipes:
"The desire to share a great wine with my dear friend Rabbi Shmuly Hecht was the original inspiration to create Tiferet. Rabbi Shmuly would invite me over to taste these kosher wines which had all been cooked. In my opinion it ruins the wine, and I realized that Rabbi Shmuly didn't know what wine is supposed to taste like.

To make uncooked kosher wine that may be used within a Jewish ceremony, it must be made by those who live their lives as Sabbath-observing Jews. We set out to make the best wine possible. With hands off coaching by Eric von Krosigk, the most awarded winemaker in Canada, we used the best organic grapes in a vintage year, Merlot, Cabernet Sauvignon, and Cabernet Franc, and aged the wine in 100% new French and American oak barrels.

The wine was made by Rabbi Shmuly's own hands, with hardly any intervention. It matured beautifully and naturally and was bottled without fining or filtering. It is truly the work of the elements, and of natural forces beyond our control. We can only take credit for partnering with these forces to bring forth this incredible wine. We used the finest corks and bottles to ensure that the wine can be cellared for decades to come and mature into something rare and transcendent, although the wine is soft and ready to drink today. This wine has the aroma of baby's breath and the flavour of mother's milk. It is one of the most magnificent wines ever produced in the pristine northern most viticulture region of the world with the highest level of anti-oxidants of any wine in the world. Pyramid energized, certified organic, and non-mevushal kosher under the authority of Rabbi Levy Teitlebaum of Ottawa Vaad Hakashrut, we are very proud to offer this first uncooked kosher certified wine ever produced in Canada. Tiferet, loosely translated, means beauty."

How to order Tiferet
Tiferet, $100 per 750ml bottle, is available only through the winery.
With only 1200 bottles produced, it is anticipated this special wine will sell out quickly. To order, click this www.summerhill.bc.ca/product/2012-tiferet to visit the online order page. 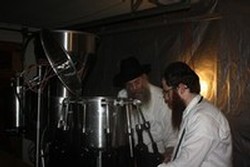 Background: What exactly makes a wine kosher?
For a wine to be correctly labeled kosher, it must be produced in accordance with the Jewish dietary laws, also known as kashrut.

The wine must be made privately by a Sabbath-observant Jew (one who follows all 613 of the Torah's commandments) during the entire winemaking process (from harvest to bottling) in a ritualistic way.

To remain kosher, the wine must also be opened, handled and poured by Jews. An exception exists, where if the wine is 'cooked' to near-boiling temperatures, the wine can then be handled and poured by non-Jews. The resulting wine is called 'mevushal' and is popular at catered events where Jews and non-Jews would be present. Most mevushal wines have been observed to have poorer quality, so to maintain the integrity of the wine (and to preserve the flavours and aromatics), Summerhill decided against heating the wine, which means Tiferet kept its overall flavour profile and tannic structure intact.

Making a wine under such conditions was an expensive and inspiring process, Cipes noted, but one that yielded an exceptional wine of unique character. "This wine can be enjoyed by anyone, Jewish or not," he offered. "It has the secret ingredient of all great wines, which is of course: love."

Summerhill made Tiferet with the help of Rabbi Shmuly Hecht, a young man who recently moved from Brooklyn to the Okanagan and Rabbi Levy Teitlebaum, who is the head of the Ottawa Vaad Hakashrut Kosher Agency. The Rabbis were the only hands to touch the wine, or any unsealed vessel that contained the wine. They operated all of the equipment and performed every task that required contact with the wine itself.  The wine was produced in a single bay garage on the Summerhill property as a private 'temple' of wine.

The wine itself bears the signature of consulting winemaker Eric von Krosigk, who selected the grapes, chose the date of harvest and confirmed the barrel selection. The 2012 vintage was ideal for the creation of a kosher wine, as it was a balanced growing season with little needed in the way of intervention.

Key components in wine such as alcohol, sugar and acids are not specifically non-kosher, but any supplemental ingredients, including finings must also be kosher. Some wineries use animal by-products as fining agents, such as fish bladders (isinglass), gelatin, egg whites (albumen) or milk protein (casein), but Summerhill uses none of these; the wine is unfined and unfiltered, therefore the wine is both kosher and vegan.

Each bottle was hand sealed in wax by Rabbi Hecht with the hechsher ("seal of approval") of Ottawa Vaad Hakashrut, which certifies that the wine is indeed kosher.