"I recently started a little experiment asking the tours to turn off their cell phones and to take a few moments of their busy lives to just BE. They were asked to cease all discussions and just quietly walk up the pyramid’s stairs and take a seat with their feet on the floor and their hands held in a prayer position but slightly held apart and to focus on their breathing so as to still the busy mind. I suggested that I would gently break the group silence in about a minute and a half. This experiment has now become so popular, that at the discretion of the tour guide, it can be done on any tour.

The knowingness of eternity awaits us in this sacred chamber. The word Py-ra-mid means "fire in the middle". We all have this fire in the middle. It is our hearts, our souls. We are mostly liquid and we are affected just like the wine is effected. The effect is clarification. If a wine has a flaw in it, the flaw is accentuated. If the wine has good qualities, they are enhanced. We humans are mostly liquid so when we enter this sacred chamber, it is a grand opportunity to clarify our own inner selves. This chamber helps us to get to the knowingness of who we are. We are electrical in nature, with impulses running from our brains through our spinal columns. We are receivers, we are conduits, and this chamber enhances our receptiveness, opening the left and right sides of our brains, much like the dolphins, whales, and elephants who are in touch with Essence, the all-one ‘soul of the world’. 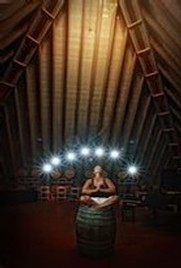 The Summerhill Pyramid is second only to the Great Pyramid of Egypt for alignment and precision. The Great Pyramid is built with technology we don't have today. It is a solid stone structure with the stones fused together so perfectly that you can't put paper between them. The stones are so large that we do not have the equipment to move them, much less cut and place them as the ancient civilization that built the Great Pyramid did thousands of years ago. It remains the largest man made structure on the planet and it is built to absolute sacred geometry, both pi and phi, and aligned to absolute True North and has no ferrous metals in it so that it does not re-orient to magnetic north.

The message is profound. We have a twenty year experiment proving the effect of sacred geometry on liquids with a twenty year track record of international gold medals. My goal from the beginning was and is to make the finest wine in the world, especially sparkling wines. The French tradition of putting sparkling wines in a dark cool place for thirty days for the cuvee and dosage to ‘marry’ was my original inspiration to achieve this goal. The wines are made using only minimal intervention winemaking, and grown 100% organically in this extraordinary pristine semi desert valley, and the clarification in this True Pyramid is the final step in production. These are alive wines full of nature’s grandness, made in the most unique winery in the world.

I welcome you with my heart, to open your heart to this unique experience."

The experiment is an overwhelming success! The conclusion... There is a definite and profound effect on liquids placed in sacred geometry. Three years of conclusive taste test comparisons in the 900 ft² pyramid led to the building of our new Pyramid that is a 4 story high 3249 ft² 8% replica of the Great Pyramid. Every day at 2 o'clock for three years, we toured the smaller pyramid with the general public.  We did taste comparisons of the same wine, bottled on the same day, and served at the same temperature.  One was stored in the pyramid for 30-90 days and the other never having being put in the pyramid.  The results were overwhelming.  The tasters chose the pyramid-aged wine almost unanimously every day as being smoother and having a better aroma.  These experiments boosted our convictions that indeed, a precisely constructed pyramid (that was oriented to true north versus magnetic north, and that was constructed without the use of ferrous metals so that it would not be reoriented to magnetic north) becomes a chamber for the "clarification" of liquids.  For instance, a bad tasting wine, or juice, would become more foul tasting.  The chamber seems to bring out flaws as well as exaggerating the qualities. We humans are made mostly of liquid and seem to be affected by the chamber as well.  We can actually feel our own "life force energy" strengthen within the Pyramid!

Many experiments have been documented in replica pyramids. For instance, it is well established that rather than rotting, milk turns to yogurt, meat petrifies and razor blades will become sharper in the pyramid (this has been patented). A timed photography experiment, conducted outdoors in an open frame pyramid, revealed that a plant growing inside the pyramid grew in a clockwise motion, while a twin sister plant nearby but not in a pyramid grew "helter skelter".

The Site of the Summerhill Pyramid

The site was carefully chosen.  First a check of interfering energies was exhausted (i.e. underground streams, electric current exposure, gas line interference, etc.)  Then the earth under the pyramid was compacted to 100%.  Then a surveyor lined up the square base to coincide with exact True North as it is here in Kelowna.  The area was then checked by an astronomer who lined up the foundation to the North Star precisely.  It is interesting to note that much excitement took place when we aligned the site because the astronomer's news that almost to the day, 1997 was "the year of the Great Pyramid".

The Summerhill Pyramid incorporates a unique "fused frame" concept tying the four hips together with the four bases and the capstone into one solid piece.  The density of the concrete is the highest and heaviest ever used in North America being 42 mpa, stronger than tunnels or bridges.  Fiberglass rebar used in underwater construction was used in place of steel.  By not using ferrous metals, the structure will not reorient back to magnetic north.

Some Interesting facts about the Great Egyptian Pyramid:

The Pyramid's phenomenon are established; however, the reasons for it can not be explained scientifically.  We offer some, of many theories for your consideration as to why pyramids actually have an effect on liquids.

For more information, we invite you to watch this fascinating series: The Pyramid Code: The Complete Series